Chinese Zodiac - Year of the Rabbit

While the astrology and horoscopes of the west look at the time of a person's birth in any given year, Chinese astrology places significance on the year itself. The Chinese zodiac is a 60 year cycle, containing five sub-cycles of twelve years, in which each consecutive year has its own animal symbol and horoscope.

Year of the Rabbit 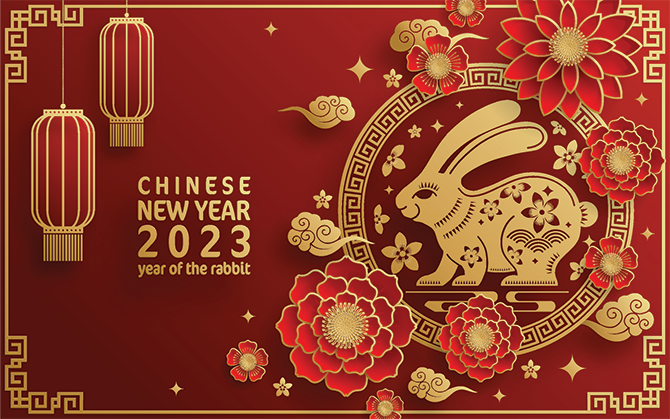 The Rabbit is most closely associated with the Water sign Pisces and Jupiter, the planet of luck and expansion, making this not only an easier, more spiritual and relaxed year but one of the luckiest years in a 12 year lunar cycle.

As we moved into 2023 the Year of the Tiger was still underway and while it ends on 21st January, when the Year of the Rabbit begins, as each new lunar year will always begin with the month of the Tiger we won’t see the end of the Tiger’s influence for another four weeks. We may even find that the more timid and peace loving Rabbit is happy to wait for the Tiger to stop prowling around before fully coming out of its burrow.

However, don’t underestimate the impact that the Tiger has had, for while things are likely to come more easily during the Year of the Rabbit, a lot of that will come from what has already been invested or the work that you put in during the Year of the Tiger. If it really is true that good things come to those that wait, then this is the year when there could be proof of that.

Of all the Yin years, which come around every other year, the Rabbit is the more relaxed, but as yin and yang always balance each other out, it comes after an especially fast paced year. The Tiger is even faster than the Horse and out of a 12 year lunar cycle it is the one with the fastest pace. As everything centres on the balance between yin and yang, to balance out a particularly fast paced year we have a more relaxed year. It is all about balance.

That doesn’t mean that the Year of the Rabbit will be boring, for there is a lot more of life to be enjoyed at a slower pace. This is so much more than just a chance to spend more time in life’s slow lane. Rabbits are cunning and if you watch them in the wild, they will stand erect, whiskers twitching and head shifting from side to side, as they sense what we can’t hear or see. The Rabbit is perceptive, adaptable and always has a Plan B.

The Rabbit might prefer a slower pace and a more peaceful life, but boy can they move when they have to. This creates a year where it will be harder to sweat the small stuff, you will be alert to things before they happen and can turn on a dime when they do, whether that is to avoid challenges or seize opportunities. The Rabbit might be soft and gentle but go beyond skin deep and you will find a steely sense of resolve.

If you are looking for a year with more balance, harmony and peace of mind but also where there is time for life’s richer experiences, then you have come to the right place. Closely associated with the planet Jupiter, this doesn’t just mean that this is likely to be a lucky year but everything else that comes under its influence, which includes travel, the higher mind, education, the gaining of knowledge and even publishing and the internet. If you have always wanted to be a YouTube star, write your own book, go to college or embark on an overseas adventure, this is the year to dust off your bucket list.

However, remember that the Rabbit is adaptable, so don’t stick too rigidly to a plan, for if there is one year where you can make it up as you go, this is it.

People are often referred to by their zodiac animals, so babies born this year will be Rabbit and expected to have personalities to match.

Legend has it that it was originally Buddha who gave the sequence of years to the dozen animals who attended the farewell meeting he called before he left the earth.

In each of its years, the animals of the Chinese zodiac have an association with one of the five elements of metal, water, wood, fire or earth. Once they have all gone through these five elements, the 60 year cycle is complete, and starts again. The elements also affect the individuals born in their years. But their basic personality traits of the animals remain the same. Here is a run down of the twelve zodiac animals and their characteristics.

From all this, you can see that Chinese Zodiac is not a predictive art as it is for western practitioners. Instead it is an art that is interpretive and philosophical. It is perhaps a way to help us understand ourselves, our partners, and all the other people in both our work and social lives.

Western Astrology is very different from Chinese astrology. Chinese Zodiac is arguably the most developed and the most followed branch of astrology in the world. The portion of Chinese astrology that the Western world is most familiar with is the Chinese Horoscopes.